FORMS
Homid: The human form of the Garou.

Glabro: The Near-Man form.
Attributes: 5
Advantages: Claws ( 2 Hand to Hand damage); 5 Extra Hit Points; Increased Density x1; Sharp Teeth (do cutting damage based on ST, as per p. B140).
Disadvantages: Stuttering (represents difficulty with human speech); minus one level of Appearance.
Skill Modifiers: -3 to both Fast-Talk and Diplomacy
Physical Changes: +6 inches or so to height, + 100% – 200% of body weight in additional, visible muscle. The face becomes sloping and beetle-browed, and the ears become noticeably elongated. Body hair is profuse and nails and teeth are longer.

Crinos: Wolf-Man form.
Attributes: ST+10; DX+3.
Advantages: Claws/Talons (hand-to-hand damage is thrust/impaling and swing/cutting); the Delirium; 8 Extra Hit Points; Fangs (do impaling damage based on ST, as per p. B140); Increased Density x2; Longer Arms (+1 hex reach, +1 to swing damage, +2 to any attempt to grapple); Penetrating Call.
Disadvantages: Appearance (Ugly); Bloodlust; Inconvenient Size (Larger); Stuttering.
Skill Modifiers: -8 to Fast-Talk and Diplomacy.
Physical Changes: Height increases to 150% of normal (yes, a six-foot Homid becomes a 9-foot Crinos!), and body weight is anywhere up to 400% of that of the Homid form. The body becomes covered with fur and the head becomes that of a snarling canine. Fangs and talons are now pronounced, the arms are long and apelike, and a tail is present.

Hispo: Near-Wolf form.
Attributes: ST+8, DX+5.
Advantages: Claws/Talons; the Delirium; 8 Extra Hit Points; Fangs; Four Legs; Increased Density x2, Penetrating Call; Speak With Animals (Wolves only).
Disadvantages: No Fine Manipulators; Stuttering.
Skill Modifiers: -8 to both Fast-Talk and Diplomacy.
Physical Appearance: The Hispo is a huge, hulking beast resembling the prehistoric dire wolf, with massive head and jaws. In emergencies it can stand on its hind legs, but mostly stays on all fours. Its weight is roughly the same as the Crinos’.

GIFTS
Homid
Persuasion: By spending two Gnosis points and making an IQ roll, the Garou may gain a +1 on all reaction rolls and social skills for one minute.
Jam Technology: The Garou can cause technological devices within 50 feet to cease functioning. This costs 2 Gnosis and requires a Gnosis roll with a modifier equal to (10-TL of the item). Even relatively simple items such as knives can be kept from working properly with this gift. Artificial Intelligences can resist this gift with their IQ. The malfunction lasts for one minute.
Philodox
Scent of True Form: This gift allows the Garou to determine what a subject really is. They can automatically tell when someone is a werewolf, and can detect vampires and faeries on a successful IQ-2 roll. Even Magi can be detected, with a successful roll against IQ-4.
Strength of Purpose: Some Garou feel so strongly about their roles in the pack, the tribe and the world that they can draw upon this resolve in times of need. Once per every hour of play, when the chaacter feels he needs additional strength of Will, he may roll against his Will score; for every 2 points by which he succeeds, the Garou gains a temporary +1 to Will (minimum +1), lasting 1d minutes.
Fianna
Resist Toxin: By making a successful HT roll, the Fianna will take no damage from poisons or diseases of any sort. The roll is not voluntary, but is made automatically upon exposure.
Howl if the Banshee: The Garou may emit a fearful howl that unnerves all in the vicinity. This requires the expenditure of one Gnosis point. All who hear the howl, friend or foe, must make a Will roll or run in terror for five seconds for each point by which they failed the roll.

Howls
Dirge for the Dead: A somber, low-pitched, drawn-out howl. Used as a requiem for the fallen; volume and length depend on the fame of the deceased.
The Call to Hunt: A long, low ululation used to alert the tribe to the position and type of prey.
The Call to Succor: Used by Garou to call their pack for aid. Embarrassing but occasionally necessary, and sounds a little like puppies calling for their mother.
The Chant of Challenge: Invented by the Fianna, this is a systematic recitation of one’s name, tribe, lineage and deeds, and an equally systematic insult to the challenged one’s capabilities. Used to initiate duels.
The Curse of Ignominy: A snarling whine used by the pack to scorn those who commit acts against the tribe.
The Howl of Introduction: A call sent up upon entering the territory of another Garou or pack to announce one’s presence and ask permission for entry or passage. It also acts as a complete identification, for the recitation of one’s name, tribe, pack, totem and linage is included.
The Hymn of Praise: This is sung to those Garou who have distinguished themselves among the tribe. This is the normal means by which extraordinary feats, honorable actions and wise decisions are made known to all present at a moot. After a Hymn of Praise is sung, the GM may award a Reputation to the subject.
The Snarl of Precedence: Sung by the Garou who wishes to go one-on-one with a foe, it is a battle challenge. It does not have to be honored by those of higher Status, but it is considered ignoble to ignore it.
The Wail of Foreboding: A general danger signal.
Warning of the Wyrm’s Approach: A very sharply-pitched howl, sung in a series of staccato bursts. It is a special warning howl used only to announce the detection of the Wyrm or its minions.

Brendan was sent with a small pack of Garou to set up a Caern outside of Gothem. The purpose of the pack was a scouting mission to Gothem in response to the sharply increased presence of the Wyrm (Sabbat). Brendan was sent as his pack’s representative to the moot, but while he was away Snarl betrayed the pack to the Sabbat. The Sabbat killed all the entire pack save Snarl and Brendan and desicrated the Caern. Upon his return Brendan figured out, mostly, what happened and is hunting Snarl. While hunting Snarl, Brendan was ambushed by ten Sabbat who almost killed him, but were foiled by the intervention of the player team. After much questioning and a bit of testosterone posturing Brendan met Cassandra and has agreed to join M.H.I.. 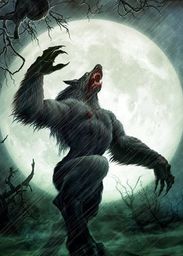