The good folks at Hornady have done it again!

Hornady occasionally sells their A-Max cartridges in special “Zombie” boxes, calling them the Z-Max. Production runs are limited, and most shooters might buy one or two boxes as a joke, believing that the colorful box is nothing more than a clever marketing gimmick for their normal, but superior quality ammo. Unbeknownst to them, there is a secretly practicing mage at Hornady. This mage REALLY has it out for undead, and secretly enchants the ammo to be effective precisely for its intended purpose! 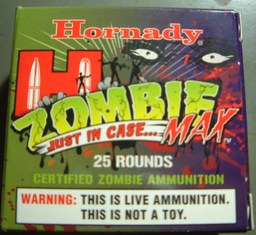