This is an “update” to what I took from the GURPS High-Tech book. I have made a few adjustments accounting for technology improvements since the books’ publication, the differences between GURPS 3’rd edition and 4’th edition, and price changes, but am mostly including it as a point of reference. Please pay special attention to the cartridge used, the .50BMG. Barrett also chambers this weapon in another cartridge called .416 Barrett. I will give this weapon and others like it a different entry for that cartridge.

Oddly enough, the book misspelled “Barrett.” (The book only had one “T” at the end.)

The accuracy rating above will assume that the shooter is using match-grade (high-quality) ammo.

For further reading, consult the technical specs and sales information from Barrett’s Website.

It’s very much worth noting that this weapon, and several others like it were developed specifically for LONG-DISTANCE shooting. Long distance in this case means 1000 yards / 1000 meters and beyond. Typically weapons such as these are “zeroed” at distances 600, 800, or 1000 yards / meters. For a standard shot from the .50BMG, the bullet has not even fully stabilized its spin until about 300 yards. This means that the weapon will not be accurate closer than 300 yards. Of course, one could take the muzzle of the weapon and put it directly up against a given target and pull the trigger, but St. Hathcock help the poor bastard dumb enough to actually do that, (never mind the target) who will be caught in backlash of hot gasses, not to mention the unpredictable location of the projectile afterwards!

It’s also worth noting that there are several standard types of military ordinance in .50BMG, which will all work with the M82-A1, even if they don’t all follow the same ballistics chart, (vertical flight path.) First, we have standard, run-of-the-mill hardball. This is basic ammo. We then have tracers, which leave a bright trail of light tracing the bullet’s flight path. These are only used in training for this type of weapon, although they are used with the M2 (Ma – Deuce) machine gun. The next type is armor-piercing. Keep in mind that in military jargon, “armor” does not mean body-armor. It means armored vehicles, LAV’s, tanks, etc. The next type of ammo is an incendiary (in-sin-dee-air-ee) round. This means that it burns whatever it hits. The final standard military ordinance is pure evil! :-) It is an armor-piercing-incendiary round. It is primarily used for defeating armored vehicles, since it not only pierces the armor, but also burns for a few feet of whatever is just inside the armor, in essence, the crew. This round also offers the bonus feat of bouncing around inside said tank after penetration, shredding up whatever is unlucky enough to be hit. (Although this is less true of the .50BMG as it is of discarding sabot rounds fired from A-10s and other aircraft.) If you get hit by this, and manage to survive it, you are one lucky bastard! At any rate, the vehicle is otherwise out of commission.

Another thing worthy of note is that this isn’t a weapon that someone typically totes around as a standard small-arm. It weighs 30 pounds with a full magazine, but that’ doesn’t include the optics mounted on top, (which are actually more important than the weapon in terms of accuracy,) other magazines and extra ammo that one would naturally have with them for this type of weapon. All told, including everything that would reasonably be used with it, it would weigh in the area of 80 pounds! Even a top-notch shooter will not carry this around every day. Imagine having to carry something like this 8 to 15 miles whilst also carrying all one’s other gear, weapons, food, water, and other stuff. That isn’t fun by any means! Also keep in mind that the overall length of 57 inches is just 3 inches shy of 5 feet!

Finally, the above information assumes a “civilian” barrel. “Military” versions of this weapon have barrels which have something known as a “gain-twist” which works to significantly flatten the bullet’s trajectory on the condition that the bullets in question are absolutely, positively evenly balanced along their spin axis. The gain-twist imparts a significantly faster spin to the bullet as it flies through the air, giving it much greater stability, due to the gyroscopic effect. This effect almost doubles weapon’s maximum effective range against a given target classification. The downside is that bullets which are less than perfectly evenly balanced will wobble like crazy, and will be nowhere near as accurate in comparison to a “normal” barrel. Compare this to a moderately-well thrown football to an exceptionally-well thrown football. The exceptionally-well thrown football will be more accurate, and easier to control than one with even a little bit of wobble to it. The cost of the barrels and ammo in question is insane. Only the super-rich and / or super-excellent should attempt to get involved in this level of shooting.

Okay GM information here. Then Blackfedora says the Barrett M82-A1 will destroy a tank he does not mean a full main battle tank such as the Abrams, Centurian or Leopard tanks. What a Barrett will disable is a light armored vehicle if hit at a weak point. Something like an M2 or M3 Bradley fighting vehicle or possibly an LAV-25 if hit at a criticle point, but still that would be exceedingly rare. More likely would be one of the armored vehicle such as the classic M113 which Barrett M82-A1 would take out with the correct ammunition, although the point of aim would still be important a straight frontal shot would probably not do it. Armored cars such as the type used by banks and armored limousines used by politicians and businessmen, light armored military vehicles like the Sidewinder and Humvee and such would be swiss cheese. 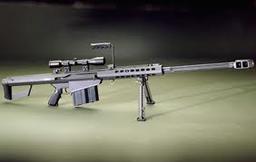