The Glock model 20 is like its earlier predecessor, (the Glock 17) in that it has the same basic composition and design.

The model 20 is built on a larger frame, made of a poly-carbon plastic, and was designed from the ground up to handle the full power of the 10mm (ten millimeter) cartridge, which had a reputation of ruining guns made from steel. The 10’s reputation was only partly deserved. Some of the steel guns chambered in 10mm were scaled-up versions of the famous Colt 1911, and unfortunately suffered from cracked frames and / or slides. The cartridge was blamed for the problems, but the real issue lay in the inherent engineering difficulties involved with scaling up a handgun which was originally designed to work with the comparatively low-pressure .45ACP cartridge to be compatible with the fairly high-pressure 10mm cartridge. The ultimate failure lay in the fact that the 1911’s slide was too light to handle the 10mm’s increased recoil, and thus, slammed to the frame’s rear with too much force.

When Glock designed the model 20, they designed it so that the slide would be heavy enough to handle the recoil force, and still operate correctly. The polymer frame was also sturdy enough to handle the increased pressure and force. Other guns have since come on the market that can handle the 10mm’s original loads, but that’s only because they did what Glock did, which was to design a gun around the cartridge.

The 10mm is an excellent cartridge in that it combines the best aspects of several other cartridges into one. The 10 has a heavy projectile, like the .45ACP, and fast velocity, like the “+p” loads for the 9mm. The 10 has a very flat trajectory in comparison to most other handguns. This translates directly into longer range. The cartridge also has a reputation for being extremely accurate in comparison to other handguns. It also has a reputation for having a very strong recoil, but this is mostly due to quality issues related to the earliest guns to chamber it. In reality, the 10’s recoil is only slightly more than that of the .45ACP. In essence, the 10mm is the ideal military / police cartridge.

This is Ritter’s personal choice for standard sidearm in the field, except that his is modified with tritium sights, and an internal (guide-rod) laser sight.

The ratings above make no assumptions about the ammo, except that it is loaded to the weight and pressure of the original 10mm load.

I used several handguns as a basis of comparison for GURPS. The Glock 17, Colt Python in .357 Magnum, Colt 1911, and the Desert Eagle in .44 Magnum were all selected for comparison. In comparison to the Glock 17, the Glock 20 is slightly bulkier for roughly the same weight. Like the model 17, the model 20 has a lower bore-axis in comparison to other handguns, which helps keeps muzzle-flip under control. The higher bullet mass and velocity both produce more recoil than the 9mm, but the aforementioned low bore-axis keeps the perceived recoil in the area of the 1911, and the actual muzzle-flip a bit less. Thus, the recoil value and strength vs. recoil are more than the model 17, but not more than the 1911.

The external ballistics of the 10mm put its overall performance as being essentially equivalent to the .41 Magnum, which is between the .357 Magnum, and the .44 Magnum. Since there was nothing in between these two in GURPS terms, I decided it was closer to the .44 Magnum based on bullet diameter. Thus, the 10mm has the same damage category as the .44 Magnum.

The model 20’s frame is slightly bulkier than the model 17’s frame, but not as much as the Desert Eagle’s frame. The cartridge is actually and genuinely more “accurate” at standard distances due to increased velocities, so I increased the accuracy by 1.

An interesting thing about the 10mm is that it shoots flatter than many handgun cartridges, and a great deal flatter than the .44 Magnum in particular. Those who like to stretch the limits of handgun shooting in terms of distance prefer the 10mm for precisely this reason. Some distance and accuracy tests of the Glock 20 have shown that the model 20 can hit targets reliably at the 300 yard range. Granted, the shot group sizes are in excess of 11," but that is with a standard factory barrel, factory sights, and factory ammunition. A better selection of standard factory ammunition could possibly yield somewhat smaller group size. Given that the average human torso is between 11" and 14" wide, and at least twice as tall, this would qualify as as a maximum effective range versus a point target of 300 yards. Its 1/2 distance should reasonably be a bit less than that. 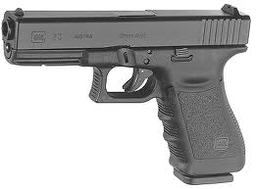