This is Ritter’s main choice for every-day carry. His is modified with night-sights and an internal laser. It switches to the role of backup when in the field. It can be reloaded with the model 20’s magazines, giving it a capacity of 15 when reloaded in that manner.

The ratings above make no assumptions about the ammo, except that it is loaded to the weight and pressure of the original 10mm load.

The shorter barrel does slow the projectile down, but not to a degree which would effect its damage potential at likely self-defense ranges. Its maximum range and 1/2 distance are noticeably shorter, but that’s acceptable for a close-quarters self-defense weapon. 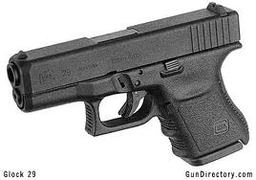