This is a customized Kel-Tec PLR-16. It is ideal for a personal-defense role and / or CQB.

The additions over standard include:
A single-point sling for ease of carry and a more steady firing position than a normal handgun. An under-mounted accessory rail and hand-guard. A combined-unit laser sight and tactical light. A custom muzzle brake, and muzzle brake attached suppressor. A high-end 2.8 power scope, attached in a manner which allows the use of the iron sights as an alternative, and so that the scope does not co-witness the front sight.

This is Ritter’s go-to gun for the “zombie apocalypse.” Originally, he considered the zombie scenario as nothing more than a funny joke passed around the professional shooting community. Having witnessed the things of the “world of darkness,” he now takes the zombie scenario a great deal more seriously, and has stocked up on soft-point ammo which gets tight groups with this weapon.

Ritter also intends to develop a more generalized CQB version of this weapon for his comrades.

In comparison to a bare-bones PLR-16, the customized version has incredibly light recoil due to the use of a muzzle-brake or suppressor. The customized version is also bulkier due to the use of the scope and tac-light/laser combo. The use of the sling allows the operator to press the weapon outwards during firing to increase stability. It’s not as good as a stock, but it’s better than what one would get with a 1-handed pistol shot. This adds to effective accuracy. (This assumes all shots are fired 2-handed.)

The scope allows the shooter to engage targets further out by making them appear closer. Having a good range-to-target estimation, though, is very important with this setup, since the PLR-16’s trajectory is more “rainbow-like,” (in comparison to a full-length barreled M-16.) Shots taken at 400 yards or longer incur a -1 penalty to-hit, since this is at the very tail-end of the weapon’s usable trajectory.

This also assumes standard military ordnance. Developing a custom load for accuracy will increase the accuracy rating by +1. 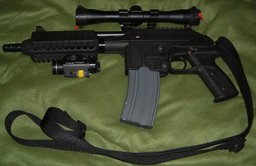