Laser Sights for Rifles or Handguns

Laser sights operate by shining a dot of light on the target. They do not leave a visible “line” of light between themselves and the target unless there is fog, clouds, or dust in between.

Laser sights are primarily for use in low-light conditions and when firing at relatively close distances. They allow the shooter to focus on the target in fast-paced action, giving at least a few overlapping advantages with reflex sights.

Lasers typically come in two colors, red and green. Red lasers are typically only visible in low-light situations and / or indoors, and have a maximum range of about 100 yards. Green lasers are visible during daylight hours out to 100 yards, and are useful at night out to about 1000 yards.

Laser sights are only accurate at one, or perhaps two distances due to the fact that bullets follow a parabolic trajectory, while the laser follows a straight line. Lasers are typically used in conjunction with other sighting systems.

Lasers are usually clearly visible from downrange, and can give away a shooter’s concealed position, if the user is not careful. The best use is to use the laser only momentarily, to confirm that the shooter is on-target, and to remain off during all other situations. This use coincides with the proper use of a weapon-mounted tactical light, and the two items are sometimes combined into one unit.

Laser sights require the use of batteries. The best laser sights can operate for 10000 + hours before needing to be replaced, though.

Red lasers mounted on long guns eliminate up to -2 of penalties associated with shooting under low-light or no-light conditions. Lasers will operate with no light. Using a laser sight adds a -2 penalty to any stealth roll related to staying hidden. Green lasers can be used to make precise shots under no-light conditions provided that the weapon has been either zeroed to the distance, or adjusted the distance to target. An aimed shot may be taken without penalty.

Red lasers on handguns allow a shooter to fire in low-light or no-light conditions as above with the usual penalties reduced by a maximum of -2. They also reduce penalties related to firing a handgun in hand-to-hand combat, by allowing the shooter to focus on the target, (which is more natural). Lasers which are mounted externally to a handgun must be attached to an appropriate mount type. In this case they require a special holster, and the laser adds 1 to the weapon’s bulk penalty. Lasers which are internal to the handgun either replace the guide-rod, or are part of a special grip replacement. In this case, the weapon can be carried with a normal holster, and its bulk rating remains unaltered.

There is little purpose in attaching a green laser to a handgun. 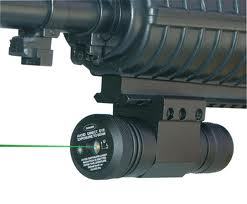