AKA Holographic or Red-Dot sights

Reflex sights are designed to give a shooter the advantage in fast-paced and / or close-quarters combat. They allow rapid target acquisition and engagement in a manner that feels natural and instinctive.

Reflex sights do not shine a laser on a target. They operate by creating a false image within a film window, which gives the eye the illusion of a red dot “floating” somewhere down range. When a rifle has been sighted in correctly, the shots will strike where the red dot appears to be “floating” if the target is at the rifle’s “zeroed” range. (A zeroed range means a given distance from the shooter which is used as a point of reference.) The basic idea behind the reflex sight is that if the red dot is lined up dead center on a point-target, and the trigger is pulled, the shot will hit somewhere on the center-of-mass.

Reflex sights are typically used with both eyes open, allowing the shooter to maintain a greater situational-awareness in comparison to other sighting types. The operator does not suffer from “scope vision,” and as long as the reflex sight does not use magnification, the shooter will not suffer from eye-strain either. This is part of what allows for faster target acquisition. Thus, most reflex sights are not magnified.

Some reflex sights are compatible with image-intensifying night-vision, while some are not. The only real downside to the reflex sight is that most of them require batteries to operate correctly.

Reflex sights do not add any inherent bonus to a weapon’s accuracy modifier.

Examples of quality red-dot sights are made by EoTech (EE-OH Tech). Trijicon makes a type of reflex sight which does not require batteries.

Reflex sights used on rifles or handguns will have the following GURPS functions provided that the target is within half of the weapons 1/2 distance and that the reflex sight is between 3 and 7 MOA:

When making an All-Out Attack, Determined, either add a +2 bonus to the normal +4 bonus, (making +6), or add the weapon’s accuracy modifier to the attack roll as if you had spent a round aiming.

When making an All-Out Attack, Double, add a +2 bonus to each attack roll. (This does not apply if the weapon’s rate-of-fire is less than 2.)

When taking a 1/2 movement, All-Out Attack, Determined, add an additional +1 to the attack roll.

When making a normal attack, add a +1 bonus to the attack.

The penalties associated with a “Move and Attack” maneuver do not apply.

If a target is beyond half the 1/2 distance, but still within the 1/2 distance an Aim maneuver may be taken normally. If the Reflex sight is 3 MOA or greater, this shot has a -1 penalty. 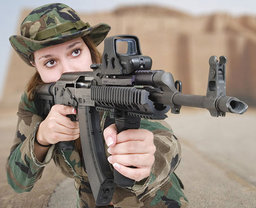