These are what most people think of when they see a “scoped” rifle.

Scopes do NOT make a rifle or shooter more accurate. Instead, they magnify existing light, making the target appear to be closer than it actually is. They consist of a metal tube which has glass lenses, and a reticle, (often called “cross-hairs.”) High-end rifle scopes have exceptional quality glass which is coated with special, (and usually proprietary) chemicals, enhancing their ability to transmit light, reduce distortion, and / or give their outer surfaces resistance to scratching, or the ability to shrug off moisture. They are also typically filled to a slight pressure with nitrogen gas, preventing them from fogging up.

Rifle scopes require daylight to use correctly. High-end rifle scopes can extend their hours of operation into the early morning and late evening hours, and for some applications, this is a make-or-break issue. For combat systems, this makes it easier to interface with image-intensifying night-vision devices.

Bullets do not fly along a linear path. They follow a parabolic trajectory. This means that the exact center of a scope’s reticle will only be dead-on at one or perhaps two distances if it is not adjusted for a range. This requires the operator to have at least a rough idea of the bullet’s rise and fall in relation to distance. The best case is that the shooter has measured a bullet’s flight path across multiple distances of reference, taking into account differences in bullet type, altitude, temperature, and humidity. The results of these measurements are called ballistics charts, or ballistics tables. A shooter will encounter fewer difficulties when placing shots at long distances if he / she knows as much as possible about a weapon’s ballistics. A shooter who does not know anything about a weapon’s ballistics will incur a -4 penalty to-hit until the difference between point-of-impact and point-of-aim can be observed and corrected. A shooter who only knows what he / she can infer from a weapon’s barrel length and caliper will be at -1 to-hit until corrections can be made. Having a spotter who is at least semi-competent can speed this process up dramatically.

All shots are subject to the wind’s effect. Lighter bullets, as well as shots placed at longer distances are more dramatically upset by the wind than closer shots, and / or shots with heavier bullets. Shots that are placed at long distance (1000 yards or beyond) have from a -1 to -4 penalty if the wind and / or air conditions, (temperature, humidity, altitude,) have not been been accounted for, (assuming a caliber of at least .308. Smaller calibers and / or bullets of slower speed may be effected even at shorter distances.) The wind can be “read” by observing flags, ribbons, people’s hair or clothing, tall grass, leaves of trees, the sails of a ship, brush on the ground, etc. Having a good spotter can help in this area as well.

Long-distance shots are also effected by the earth’s rotation, known as the Coriolis effect. A shot which is more North-South will be more strongly effected left-to-right than an East-West shot, which will give a virtual, (not an actual) modification of a target’s distance. Shots that are somewhere between perfectly North-South, and East-West will receive a mixture of the two effects. A proper long-distance shooter will need to know how the Coriolis effect will influence his / her shot in order to be accurate. A shooter who is not familiar with the Coriolis effect will suffer a -2 penalty to-hit until he / she can correct for it via observation between point-of-aim and point-of-impact. A well-seasoned long-distance shooter will know how to compensate for this effect.

Extremely long-distance shots are also slow. Depending on the range to the target, and the bullet’s speed, (in essence, its caliber), the bullet will be in the air anywhere between 2 and 5 seconds. Thus, the shooter needs to hit where the target will be in about 3.5 seconds, not where it is now. It’s also conceivable that an excellent shooter could have 2, or perhaps 3 bullets all in the air, and all on target at the same time, each striking in its turn. If the target is moving, the shot incurs a -1 penalty. If the target is moving quickly or erratically, (in an unpredictable pattern), the shot may incur a penalty from -2 to -6.

Turret Paralax Adjustment — All rifle scopes have paralax, which is the apparent movement of the reticle in relation to the target due to minor movements of the shooter’s eye. Paralax can be corrected, but only at one distance at a time. Older rifle scopes with variable paralax adjustments had an ring on the objective lens, (the big, business end) which could take up to half a minute of time to turn to the correct distance. Newer scopes have paralax adjustments on the turrets, (the round knobs in the middle of the scope.) This means that the adjustment can be made within 1 – 2 seconds. This is important for tactical shooting, and a nice convenience item for hunters.

Finger Adjustable Turrets — Older scopes had turrets which required the use of a coin or screwdriver to adjust the windage and elevation, (cross hair settings). For a shooter who is shooting bench-rest, or is otherwise under no time constraints, this is not a serious issue, and can be ignored. For a tactical shooter, this is a clumsy obstacle which can be avoided by using finger-adjustable turrets. Similar turrets can have a lock-out feature, allowing the shooter to press the turret in to prevent it from being accidentally rotated, while still allowing rapid adjustment when necessary.

Anti-Reflection Device — This device screws onto a scope’s objective lens area. It consists of a honeycombed pattern of corrugated sheet metal which reduces or eliminates the likelihood of giving away one’s position due to glare off the objective lens. For bench-rest and hunters, this is irrelevant. For the tactical shooter, this is important.

Flip-Up Lens Caps — These are either plastic lens caps which slide on, or machined aluminum caps which screw into threaded areas on the scopes tube. As the name implies, the caps operate by flipping up for use, or folding down for non-use. Some of them flip up by pulling a tab, and some flip up by pressing a button.

Bullet-Drop Compensation (BDC) Reticle — This is a type of reticle whereby the amount of “drop” a bullet undergoes at standard distances is given detent positions on the reticle’s lower side. This allows a shooter to engage targets at known distances without having to re-dial the scope’s elevation setting, and instead, use a hold-over. This isn’t quite as accurate re-dialing the elevation adjustment, but it is faster. In order for a BDC reticle to be made correctly, the scope’s manufacturer needs the ballistics information for the rifle and cartridge that it is intended to be used with. A BDC reticle will only be accurate with ONE type of ammunition. For the most part, BDC reticles are only available on high-end scopes. 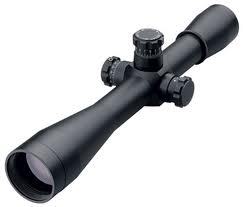