Suppressors are what are otherwise commonly, incorrectly, known as "silencers."

There are two basic types of suppressors: suppressors that use something called “wipes,” and can style suppressors, which do not.

Wipes are sized pieces of stiffened cloth through which a bullet passes as it moves through the suppressor. Wipe suppressors are typically extremely short in comparison to the can style. They also have a lifetime of about 5 or 6 shots before the wipes require replacement. Since the wipes actually touch the bullet as it passes through the suppressor, this type of suppressor is detrimental to a weapon’s accuracy, and thus, is not used except for extremely close shots. They are only truly used on handguns, since the loss of accuracy negates the benefits of a long gun.

For GURPS purposes, “suppressor” shall refer to the can style of suppressor, and will ignore the existence of the wipe style altogether.

The can style operates a bit differently. In a can style suppressor, a cylindrical volume made of either steel or aluminum is divided into several chambers by something called baffles. A baffle is little more than a steel or aluminum disc with a hole in it. The bullet passes through the hole without touching it. The purpose of dividing the cylinder into chambers is to allow the gasses behind the bullet to expand into a large volume and loose pressure gradually. This means that by the time the bullet exits the suppressor, the gasses behind it exit at a much lower pressure. This reduces or eliminates the weapon’s report. This also has the added benefit of eliminating the weapon’s muzzle flash, (the visible light associated with the stream of hot gasses that exit a gun’s barrel). Suppressors also reduce recoil, but not to the extent of a well-designed muzzle brake. Suppressors are also quite useful as hearing protection.

Although a suppressor can be used to reduce the overall sound a gun makes, it can never be expected to totally eliminate it. This is because guns make sound in 4 different ways.

The next sound of consequence is the sound of the sonic boom following most bullets. Only bullets that fly faster than the speed of sound, (are supersonic,) create a sonic boom. Most bullets from most handguns and rifles are supersonic for at least a part of their flight. A mitigating factor with sonic booms, tough, is that a bullet’s direction can not be ascertained based on the sonic boom. Even though the sonic boom can not be used to determine a bullet’s flight path, it does indicate that a bullet was fired, and that there is a shooter somewhere in the area. Thus, it is advantageous to eliminate the sonic boom. This can be done by selecting sub-sonic ammunition. The downside of that is that subsonic cartridges, or other cartridges that have subsonic loads have greatly reduced comparative ranges. Never the less, it is sometimes the best choice to go with a sub-sonic load.

The next sound of consequence is the sound of the weapon’s action. This includes the sounds of the trigger breaking, the firing pin hitting the cartridge primer, and any mechanical cycling the weapon might do, (if it is semi-automatic.) While these sounds aren’t incredibly loud, they are present, and can give away a shooter’s position if there are enemies nearby. This can be mitigated by selecting bolt-action weapon over a semi-automatic. There are also modifications that can be made to a semi-automatic weapon to give the weapon a select-fire capability; the operator can select semi-automatic action, or can select manual operation. This means the operator must manually cycle the weapon, but also means that the sounds related to its operation can be broken into multiple parts, and can be done a bit more quietly than otherwise. There are also certain modifications which can make bolt-action rifles even more quiet than before, but they require talented gunsmithing. Even still, this classification of sound can never be completely eliminated.

The final classification of sound that guns make is called the weapon’s report. This is the sound of hot gasses exiting a gun’s barrel at extremely high pressure. This is the classification of sound that suppressors deal with. A suppressor’s effectiveness at this task is primarily a function of the suppressor’s overall volume vs. the cartridge’s pressure as the bullet exits the barrel. There are other factors in play, but it’s mostly this. Cartridges which are low-pressure, (in comparison to other gun cartridges,) and / or subsonic velocity are ideal for suppressed weapon systems.

Even still, even if not all of the types of sound can be dealt with perfectly, a suppressed system is still a good choice for many operations. For sharp-shooters, (especially camouflaged,) the elimination of the muzzle flash is the real benefit of using a suppressor. In some setups, even with supersonic ammunition, the loudest, (or at least most noticeable) sound is the weapon’s action.

Suppressors also have a tendency to become hot rather quickly. This makes a person’s infra-red signature stand out more than normal. This is problematic if one is attempting to remain stealth-full and has reason to believe that the enemy has infra-red observation capability. There are ways around this, but they don’t work exceptionally well. This is a risk involved in using a suppressor.

This assumes that the suppressor in question is a high-quality device manufactured by a competent engineer and machinist.

The suppressor adds a -8 penalty to anyone attempting to hear or notice the gunshot’s sound. If the suppressor is specifically tuned to the weapon, this becomes -9 instead. There is an additional -1 penalty if the weapon is a bolt-action or or a semi-automatic which has been modified to operate more quietly than normal by a competent gunsmith. This penalty becomes -2 if the weapon is bolt-action AND modified to function quietly. An additional -2 penalty is assessed if using a subsonic load. Also, as per the book, a distraction imposes an additional -2 penalty, along with unfamiliarity with guns, and being 1/4 mile away. The penalty related to distance becomes -4 for any distance of 1/2 mile or more. Penalties are also assessed for background sounds: -1 for light conversation, up to -5 for a fully operational machine shop or loud “music” concert.

Assuming the weapon does NOT normally fire using a muzzle brake, subtract 1 from minimum strength vs recoil, and 1 from recoil.

Add 1 to accuracy. There are several reasons for this, but they take a long time to explain.

Any weapon that has a suppressor attached to it adds +1 to its bulk penalty, and handguns require a holster that has an open bottom. 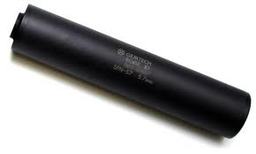